The Agile Malaysia meetup group received a surprised invite from Joseph Chee about an Agile Lean Conference happening up north in Penang on the 23rd July last year. Not much details were initially forthcoming except we knew there would be a few external speakers – Michael James (Collabnet), Nagendra Kumar (McAfee) and Evan Leybourn – and a number of internal speakers from Intel all set for this event.

We found out later this was an internal Intel event but Joseph was keen to extend the first day to the Agile Malaysia group for us to get some exposure and learnings from the sharings given by the speakers. We learnt that Intel has been holding such internal Agile conference at three different global locations on a yearly basis. Last year was Malaysia’s turn to host the event for the Asia region and as such the Agile Malaysia group was fortunate to be given the opportunity to partake the conference for some sharings.

The theme of this year’s conference for Intel is “Crossing the Chasm” and it relates to how they are setting up the expectations of their staff to take that leap when it comes to Agile adoption. Intel has been involved in Agile development (in both hardware and software projects) since 2007. They have close to 7,000 practitioners of Agile across their global offices (in various roles) and their call was to reach for their target of 10,000 Agilists in Intel by the end of 2013. 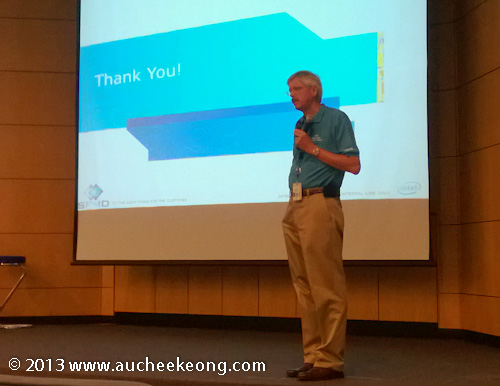 One of their senior leaders Terry Nefcy kickstarted the keynote session with an overview of how Intel is implementing “Agile in a Large Organizaion” and the challenges that come with such initiative. Some takeaways from Terry’s talk

Terry also mentioned “cadence” a number of times in his talk. Seems Intel is very particular about helping their teams understand their cadence and learn how to keep to a regular one.

Michael James, a well-known Scrum coach from Collabnet talked about the human factor in Agile implementation. He used the popular Daniel Pink’s book DRIVE – one of my recommendation for must-read in anyone’s list – to emphasis the need for each of us to own our own motivation to excel.

Michael spoke often about FLOW and he provided a few pointers how scrum masters can create circumstances for flow to occur in their teams. In fact, he stressed that the key role of a scrum master is to help their team members create flow by working on the following…

– ensure challenges are met by the right skills

Most of the senior managers when asked to name one of the benefits they wanted for their teams to move to Agile/Scrum would inevitably pick “Productivity”. Michael suggested while getting productivity improvement is useful, it’s the wrong focus to give to the team. Instead he suggested to challenge the team to add Ingenuity to their Productivity gain. To do so, we’ll need to allow the team to explore and to experience frequent failures.

If you are practising – or wish to know more about – Scrum, head over to Michael’s page at http://scrumtrainingseries.com for lots of great articles on Scrum.

We’d a lunch break – sponsored by Intel (thanks!) – before resuming the afternoon session kicked off by Evan Leybourn, an Agile trainer from Processworks based in Melboure who shared painful but useful lessons learned from failed Agile projects. While most of us like to read success stories, the real learnings are usually found in failed projects.

Evan outlined 4 primary causes of failure and provided detail examples to illustrate how they caused the projects to fail, and how he would do it differently if he’s asked to do it again.

There were plenty of symptoms and preventions described by Evan for each of the above primary causes. I’ve summarized them in the slide page below and I find it’s a pretty good checklist for you to use as “smell” to detect possible failure in your project and provide early warning for you to make the necessary alterations to get the project back on track.

You really need to attend his session if possible. Lots of useful insights from his sharing.

Their 2nd theme for this conference was about the shift to LEAN from Scrum, and I suppose this was where the Chasm existed even for those who have been practising Scrum. Do they make the leap? Should they? When? Questions which Intel Agile leaders are hoping to address through these worldwide conferences.

Ray Arell, their Director for Emergency Systems stepped up next and immediately sounded the call for “Scrum Must Die”. Certainly a controversy topic to broach in what’s still a Scrum-dominant environment in Intel. However Ray’s been with Intel for many years, and have probably seen all the permutations of Waterfall before Intel started embarking on their Agile journey back in 2007.

He has seen the teams in Intel embraced Scrum as their prominent Agile framework with different teams in Intel and various levels of Agile maturity, Ray is now actively pushing the move to Lean to prevent the fatigue and diminishing returns that can come about from too much scrumming (or too much of any one thing as shown in the chart below). 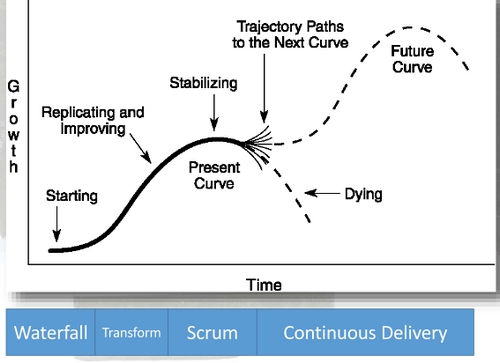 The Technology Adoption & Growth time curve (above) that Ray used to illustrate why too much Scrum-ming can lead to a diminishing returns (“Dying” state) and often times, one needs to revive the flagging growth with the next level up. He emphasized Scrum should not be seen as a “destination” in Intel’s Agile journey and asked to prepare for moving beyond Scrum – hence the topic of the talk as Scrum Must Die (in order for Lean to grow).

The Agile leadership in Intel is only too keen to ensure their organization continues to level up on the innovation & growth curve instead of dipping downwards once past the point of stabilizing, and Lean is seen as an alternative to kickstart the curve upwards. Couldn’t agree with him more. 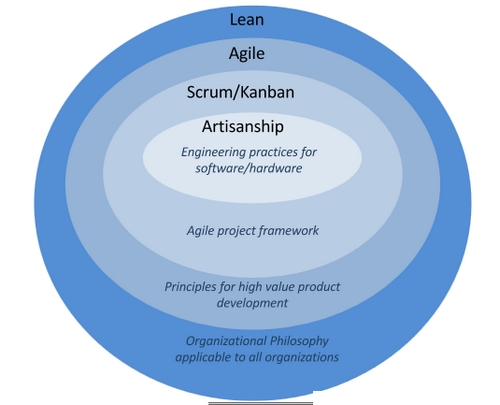 My biggest takeaway from this conference must be the slide page above which Ray used to explain the relationship between Lean / Scrum / Artisan. It not only provided a very good illustration of how an organization can grow from Scrum (or Kanban) into Lean; it also outlined the importance of ensuring the proper engineering practices – termed as Artisanship by Intel – are cultivated by the team.

This resonated well with the journey that MYOB KL is undergoing; which is getting back to basics with embracing the master craftsmanship principles of software development. What Intel calls Artisanship, MYOB calls it Craftsmanship. Both believes getting this engineering/development practices correct has to be the most important foundation in the building of an Agile / Lean organization.

The last speaker for the day was Nagendra Kumar from McAfee. McAfee was bought over by Intel in 2010. Nagendra shared McAfee’s journey of their Agile adoption and it was good to hear they are keen followers of Dean Leffingwell’s SAFe (Scaled Agile) framework. MYOB’s familiar with this framework as we’ve used a version of SAFe back in July 2012 when we were at ver 2.0 of our MYOB Agile Journey. We’ve since moved on to a more Lean approach but I would say we have retained some aspects of the SAFe framework in our current practices (eg release train).

My takeaway from Nagendra’s session has to be their Strategy for Driving Effective Adoption of Best Practices (shown in the picture above which it’s probably too blurry for you to make anything out of it, my apology). What it basically described is a framework to embed learning into the organization through a four-stage approach :-

I find it has some similarities to MYOB’s 3-step Development Map which constitutes 10% Learning, 20% Coaching / Adoption and 30% On-the-job Practice. I would want to add a 5th stage (or in MYOB’s development map, the 4th step) which is Sharing. This ties back to Ray’s comment that the best way one can develop mastery of any subject is to speak at a conference or workshop.

The day closed with a panel discussion hosted by the five speakers.

Firstly I would like to note my appreciation to Joseph, Sherine and the Intel Agile COP at Penang for extending the invitation to Agile Malaysia to attend the first day of this Intel Agile Lean conference. I’m sure I speak for the rest when I said we’ve learnt much from just the first-day talks from the five experienced practitioners.

It’s really heartening to know that Intel has a well-planned Agile roadmap and is investing into it yearly (thru such global conferences) to ensure they keep their teams updated with how they are progressing on the roadmap and help them continuously embrace Agile best practices. I heard Intel rotates the venue of these conferences yearly, so it may be a few years before the host is back to Malaysia. When that happens – and if Intel is still keen to extend the sharing to the Agile Malaysia group – you bet I’ll be the first in line to say Aye to attending the conference. J